I just found on HBO Max Twitter account that they will be hosting a watch party for episodes 21 and 22 of the 4th season with Greg Weisman and Brandon Vietti. 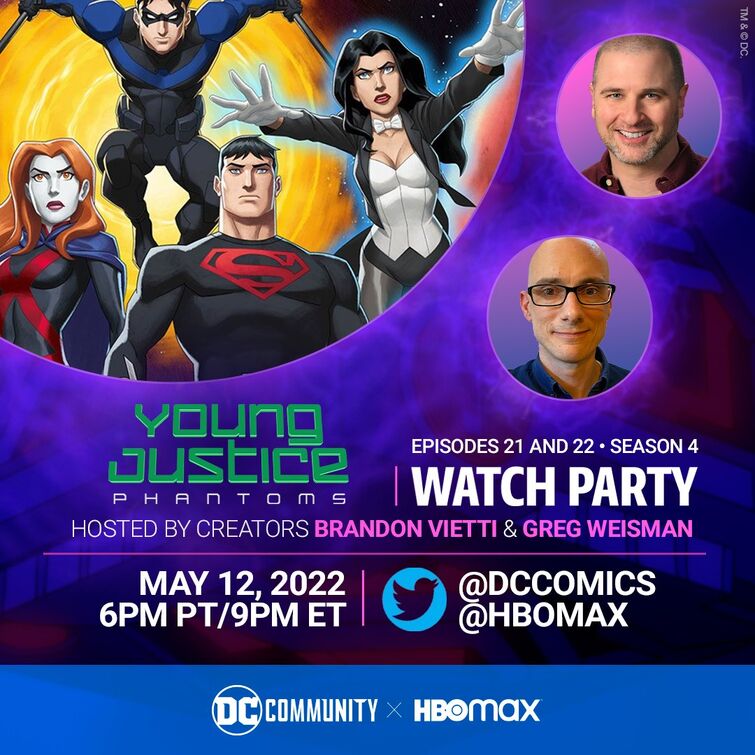 DC Comics announced a six-issue series after the finale of Phantoms. 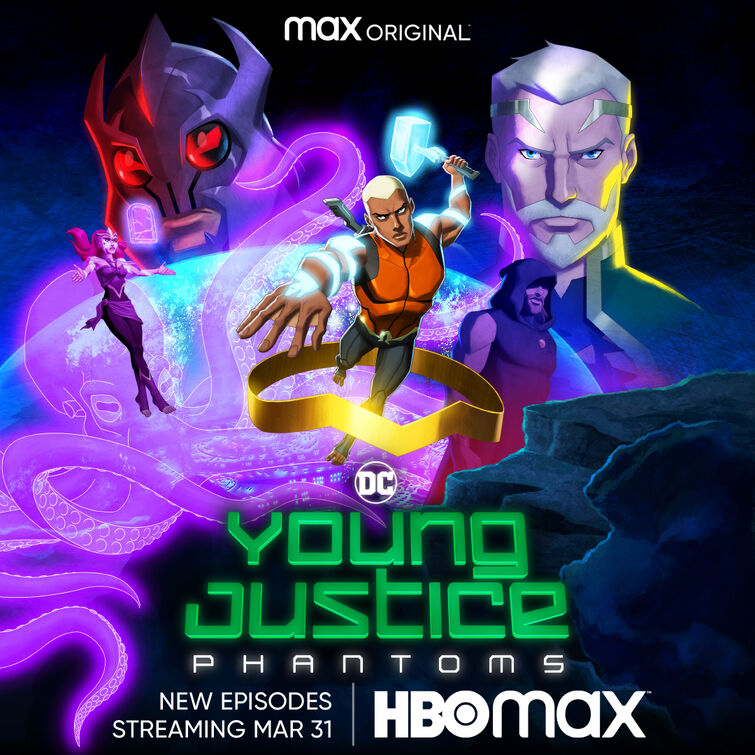 Young Justice showrunners tease the climactic second half of Phantoms

Guys check this out

The first two episodes of Season 4 are available on HBO Max. 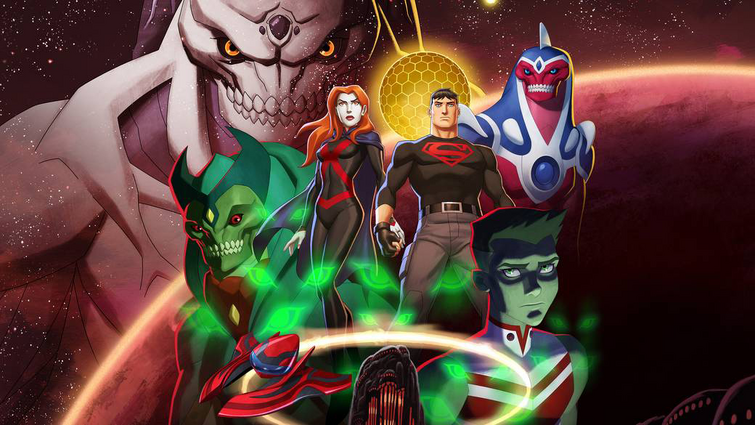 New interview released (but seems to be recorded before November 2020 when episode 26 was not written) that talks about production issues encountered for Phantoms and some clarification on "Nightmare Monkeys" with the monkey god and the Doom Patrol. And more. And it's Part 1.

We are aware that the title had been leaked. Assuming it's not a working title.

For the sake of verifiability, it won't be added anywhere to the wiki until it's confirmed by an official source. As such, it is pointless to even discuss or speculate about it.

Young Justice 4 is currently under development and will focus on a smaller group of core characters.

DC Daily has an exclusive first look at the second half of season three, which is also available on youtube.

New to DC Universe is a "behind-the-scenes" docu-series of the making of Outsiders, hosted by Whitney Moore, who also voices Courtney Whitmore this season. It features interviews with Greg and Brandon, other writers, the animators, voice actors, and post-production crew on the new season.

I know some fans will want to watch it, but don't have DC Universe. If it's okay, I'll update this thread weekly with whatever new information is revealed in the coming episodes.

NEWSARAMA: The highly-anticipated debut of Young Justice: Outsiders takes place on January 4, but on January 2 and 3 an exclusive digital prequel comic book written by the show's producer Greg Weisman will debut on the DC Universe streaming service. The two-part series bridges the gap between seasons two and three.

More great news for Young Justice fans. This rumor has been floating around since October, I believe. Now, DC has finally confirmed it in their latest press release. Yep, Young Justice is even bigger than Titans. And mind you, the last episode of Young Justice aired almost 6 years ago. A fourth season is all but guaranteed, and even more in the future. DC had better take notes!

Thank you to Greg Weisman and Brandon Vietti, and all the talented artists who brought this show to life. And to the fans who've supported it through thick and thin.

As everyone may know, DC Comics has commissioned a one-shot prequel comic to accompany season three of Young Justice and the success of this issue may ensure more stories.[1] This issue will debut on DC Universe "sometime before season 3 launches"[2] and, as of this date, there are no announced plans for print or digital releases elsewhere. However, it's very unlikely that DC won't want to capitalize from this outside their platform, so the issue should eventually be available at least digitally on Comixology.

On top of this, there's also Brian Bendis's upcoming Young Justice comic series for the Wonder Comics imprint, which may cause some property name confusion and we don't want "our" Young Justice to suffer from it.

Therefore, if we want DC to order more companion comics from Greg Weisman and Christopher Jones, we need to raise awareness of their existence among the people who still don't know that these comics exist, inciting them to buy them on Comixology and/or binge-read them on DC Universe. (Naturally this does not exclude those who already know of the comics and should keep binge reading them.)

However, unlike the show, which is available internationally on Netflix and the most popular show on the DCU app, the comics are not as accessible or even well-known. The biggest problem with the original companion comics was their "all ages" branding,[3] which for the most part meant that they were shelved with other all ages comics, as opposed to other superheroes comics. This is why there still are Young Justice fans who are surprised to find out that the show had tie-in comics.

How can we spread the word?

In order to promote the comics to as many people as possible, we decided to put together a video featuring a few pages from one tie-in comic so that everyone can see how similar they are to the show, in both quality and tone. But we thought that a slideshow of panels would not be enough to grab people's attention, so we figured that the video would be even better if the lines were read by the actors from the show. So, we asked Stephanie Lemelin to read Artemis's lines from the last pages of "Rabbit Holes" and she was incredibly kind and generous to agree to do this for the fans.

How can I help?

Just do what you can. We already brought Young Justice back when so many people said it was impossible. We can do this. Symbiosi.

Fans must raise awareness of the YJ tie-in comics to ensure the upcoming one-shot issue is successful and DC Comics commissions more stories.

According to this new ad for the game, the answer is 'yes'. The Season Pass is part of the LEGO DC Super-Villains Deluxe Edition which features the main game and immediate access to the "DC Super-Villains: TV Series DLC Character Pack".

Now, will it be based on seasons 1 or 2? Or Outsiders? If it's season one, a Cadmus-themed level based on "Independence Day" would be the best choice, in my opinion.

The Deluxe Edition is now available for pre-order at $74.99 and the Season Pass will be available separately at $14.99.

As part of the Teen Titans Go! Sale that lasts until July 30, all four YJ collections are on sale. Available digital here:

FRIDAY, JULY 20
10:00–11:00 a.m. Young Justice: Outsiders Special Video Presentation and Q&A — The fans have waited long enough and it’s time for a first look at one of the most highly anticipated shows of the year. In Young Justice: Outsiders, the teenage Super Heroes of the DC Universe come of age in an animated world of super-powers, Super-Villains and super secrets. This time, the team faces its greatest challenge yet as it takes on meta-human trafficking and the terrifying threat it creates for a society caught in the crossfire of a genetic arms race spanning the globe and the galaxy. Join producers Greg Weisman, Brandon Vietti, art director Phil Bourassa, voice director Jamie Thomasson and members of the voice cast, Troy Baker and Stephaine Lemelin as they give you an inside look at what it means to be an outsider. Produced by Warner Bros. Animation, Young Justice: Outsiders is coming soon to the DC Universe digital streaming service. Become a fan of the show on Facebook at www.facebook.com/YoungJusticeDC and follow DC Universe on Twitter at @TheDCUniverse. Room 6DE

Sounds like we're finally getting a trailer or a sneak peek. And Troy Baker is joining the cast!