That didn't take long,there are only 25 issues,you should finish them fairly soon,oh and by the comics,I obviously mean this series' comics,not the original comics the show is loosely based on

- Cleared some of the questions I had,mainly the Clayface ones

- It's a cool way from Greg to fill some space between the empty time and add some stories, reminds me of Omniverse

- Some of them made my head spin,mainly the one with Captain Atom (that or I'm dumb,weird how I understood the time travel in Ben 10 though but can't help myself with these)

- The gorillas arc was kinda lame 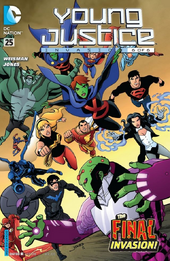 "Players, Chapter Six: Rolling Doubles‎" is the last part of the Players arc. 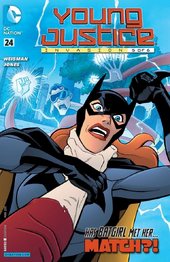 "Players, Chapter Five: Milburn, Edgar and Jake" is part five of six of the Players arc. 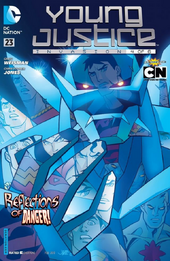 "Players, Chapter Four: Do Not Pass Go" is part four of six of the Players arc.

(edited by moderator)
Players, Chapter Four: Do Not Pass Go

"Players, Chapter Three: Landing on Boardwalk" is the 23rd issue of the official Young Justice spin-off comic series and the third chapter of a six part story. It continues the story from Part One and Part Two left off.

It seems high past time we had a thread for Young Justice: Legacy.

A new blog went up on the Legacy site a couple of days ago where story lead Sharon Scott discusses the story concept for Legacy, including some initial ideas that weren't used and some hints at what was.

Any ideas what this ancient threat could be? 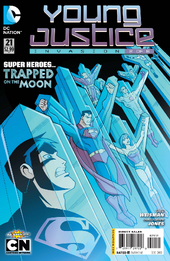 "Players, Chapter Two: Directly to Jail" continues the story which began in chapter one.

What the heck did Nabu/Zatanna say after Zatara asked him to release her?

Nabu: Witness the havoc wrought ____________. The world needs Doctor Fate, and the girl's natural affinities for the mystic arts makes her the perfect candidate. 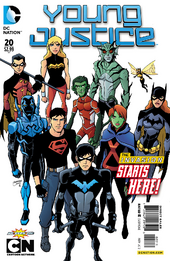 "Players, Chapter One: Wheelbarrow, Shoe, Thimble" sparks the tie-in comics' jump from 2010 to 2016 along with the television series, and also opens an exciting six part story.