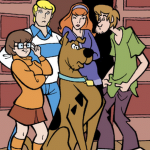 If this account meant anything back in the day, it probably means nothing now. The fan talk kinda killed interest in me contributing here between the time it ended and the time of season 3 announcement. If there's one thing I don't like what comes from this show, is the fan talk, which is ironic, perhaps, but it's just something that I truly grew to loathe seeing. I don't need the incessant fan musings to watch or read about it.

I'm a contributer on many, I have rollback here, and an admin on Scoobypedia, so like, check it out.

I seriously have a trigger happy finger. (Not really.)

I'll probably give my own thoughts on 202-204 soon. 203 & 204 were actually quite good and I'm sure they'll be other fascinating episodes ahead, but that won't change what I think of the time skip.

What you must understand is I like YJ very much (I wouldn't be here if I didn't). But that's not to say there's certain things that I don't like about it. I'm not going to like something just because of a few people's uber love for it. And just by making that remark means I must hate it. I'm allowed to pick and chose what I like and what I dislike. I'm not a machine that is programmed to love whatever happens in whatever I watch. What kind of a person would be if I did that? Well, as I said that would just make me a drone. I'll get to the point. One thing I don't like is the almighty time skip that everyone must love no matter what. You may say that's an insufficient reason for hating the show, but as I said I do not hate the show I just hate the time skip. You may even say that disliking it in general is insufficient, but that's not for you to decide for me. If anybody is reading this and likes the time skip and thinks that YJ is a perfect show that has no flaws whatsoever (which is an arrogant thing to think) then that's up to you. I'm just not going to agree with you that it was a fantastic thing that happened.

And another thing is is that when I have to explain what I don't like about it it actually makes me more bitter towards it because I have to think about what why it is I don't like it. (And in the end, yes, perhaps it makes me a bit bitter towards the show because that's what some of you just automatically thinks when someone criticises the almighty time skip that they must hate the show).

I haven't actually said why I don't like it here (why bother?), but you can find that on a few ep. discussion pages and blogs. And as you can see above I did in fact like some eps and liked even more after that.

There's a few things I didn't like about it before anyway, but that's just my conscience for some of those reasons.

Retrieved from "https://youngjustice.fandom.com/wiki/User:TheAtomicLight?oldid=224336"
Community content is available under CC-BY-SA unless otherwise noted.